"With proud thanksgiving we remember them"

The author of this website, Estelle Mumby, has been involved with family history for a number of years, and while researching the names listed on Winterton War Memorial for both world wars, it became clear that there were more casualties connected with Winterton who were not included on the war memorial.

Extensive research was undertaken by Estelle and this was submitted to Winterton Town Council, the owner of the War Memorial. After viewing the detailed evidence, councillors unanimously approved the addition of 16 WW1 names and six WW2 names to the memorial. 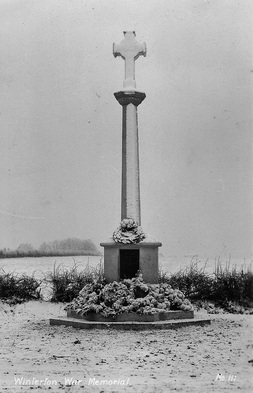 Winterton War Memorial - originally located at the junction of Roxby Road, Top Road and Earlsgate, Winterton. The war memorial was unveiled on 12 December 1920. In 1968 the war memorial was relocated to its present position in All Saints' churchyard.

Grateful thanks go to the following for their assistance in various ways regarding this project: