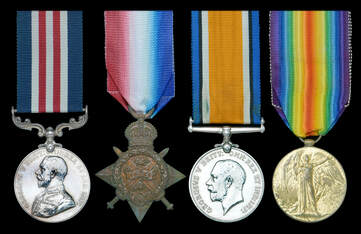 Corporal Frederick Charles Palmer (7697) 1st/2nd Lincolnshire Regiment
Frederick Charles Palmer was born at Winterton, Lincolnshire, in 1887. He enlisted in the Lincolnshire Regiment in 1906 and, after the outbreak of the Great War, disembarked in France with the 1st Battalion on 13 August 1914. He was awarded the Military Medal for gallantry on 11 April 1917 while serving with the 1st Battalion at the First Battle of the Scarpe during the Battle of Arras. The Regimental History gives the following account of the attack on the enemy’s trenches from a point about half way between the Cojeul and Sensee rivers to the Henin-Heninel road: ‘Zero hour was to be at 6:00 a.m., the artillery barrage to commence at 5:38 a.m.
The Lincolnshire and Yorks completed the relief of the 64th Brigade by 1:00 a.m. and sent out patrols to examine the enemy’s wire. Few points were found at which entry could be made, and the intervening wire was so thick that it was impossible to see through it. The enemy was alert and active.

No easy task lay before the attacking troops. The frontage was about one thousand two hundred yards, necessitated by the few gaps in the enemy’s wire. At zero on the 11th the Lincolnshire and Yorkshire advanced in excellent order, and with great steadiness, following the barrage right up to the enemy’s wire. In daylight it looked even more formidable than it did in darkness.

The Lincolnshire found three lanes, but the Yorkshire could only find one, and another with wire partly cut. Each lane was, however, commanded by German machine-guns, fired from concrete emplacements of cunning design. They were almost embedded in the earth, with narrow slits but a few inches from the ground, through which the German gunners poured a stream of bullets on the attackers. On the flanks, and in the narrow trenches situated in the densest part of the wire the enemy’s snipers were also active.
At first the advance met with very little rifle-fire but as soon as the leading waves of the attack reached the entanglements, and the lanes through which they attempted to pass, the German machine-guns poured a murderous cross-fire into the Lincolnshire and Yorkshire. Great, but useless, bravery was shown by these battalions in their attempt to get through. Many men not able to find a lane, forced their way beneath the wire, only to be shot down as they emerged on the opposite side. The two left companies of the Lincolnshire lost all their officers and the right company could not find an entrance. In spite of the heavy fire both battalions clung to their positions with splendid tenacity, in and outside of the wire (in one instance in the sunken road on the enemy’s side of the wire) until ordered by the Brigade Commander to withdraw, to enable the guns to re-bombard the wire. At dusk all units occupied their original positions. After dark the 12th Northumberland relieved the Lincolnshire, and the 13th the Yorkshire. The relief was completed by 9:30 p.m. It was snowing hard, and there was to be another attack the next day.’ (The History of the Lincolnshire Regiment 1914-1918 by Major-General C. R. Simpson, C.B. refers.)

During the Great War Palmer also saw service with the Machine Gun Corps (A Coy), the 10th Lincolns (Grimsby Chums) and the 2nd Lincolns. It was with the 2nd Battalion, Lincolnshire Regiment that Palmer was wounded on 21 August 1918 at the 2nd Battle of the Somme. As part of D Company he received a rifle bullet wound to his right arm, the Operations Book of No. 34 Casualty Clearing Station at Fienvillers adding that the wound had been excised with no fracture or injury to the main nerves. Orders for the Second Battle of the Somme, an attack by the 21st Division, saw the 2nd Battalion Lincolns charged with the objective of capturing Beaucourt.

The Regimental History gives the following detail regarding the part played by D Company:
‘By 5:35 a.m. on the 21st, A and D Companies were ready formed up in the assembly positions, which ran from north-east to south-west across Luminous Avenue: a bombing party from C Company was between the inner flanks of the companies. At zero hour a hurricane barrage fell, and in addition a Stokes gun barrage was placed on the enemy’s front, covering Beaucourt, and selected targets. This fire was well directed , driving the enemy into his deep dug-outs. Simultaneously with the barrage A and D Companies advanced to the attack. The Diary states that: “So eager were the men that they were able to keep close up to the fast moving barrage.”
D Company keeping Luminous Avenue on their left, advanced without difficulty. The leading wave dashed ahead and reached Railway Road: the two platoons following encountered many Germans coming out of the numerous deep dug-outs on all sides. These were bombed and many taken prisoners. One party of the enemy was seen on the right flank in Railway Road, and these, after being fired on by Lewis guns, surrendered.’

Back to WW1 survivors (L-R)