When war broke out in August 1914, people clamoured to do what they could to support the war effort. Men volunteered for the army and others established relief units to help the army or provide assistance to civilians and refugees. The Scottish Women’s Hospitals were one of those – yet they were also very different. They were unique because, right from the beginning, they were set up with two very specific aims: firstly, to help the war effort by providing medical assistance and secondly, and equally importantly, to promote the cause of women’s rights and by their involvement in the war, help win those rights. At the outbreak of WW1, founder, Dr Elsie Inglis desired to contribute to the war effort. She offered her services to the War Office in London, who replied “My good lady, go home and sit still.” Dr Inglis didn’t take any notice of this and neither did Lizzie as she served with the Scottish Women’s Hospital in Kragujevatz, Serbia, from 1st July -1st November 1915. But what happened to Lizzie after this date? An article appearing in December 1915 in one of the regional newspapers sheds light on her incredible story...
NURSES’ TERRIBLE TREK IN SERBIA. SLEEPING IN THE OPEN. WEEK’S TRAMP OVER SNOW-COVERED MOUNTAINS

A thrilling story of women’s heroism in peril by land and water is told by Miss Elizabeth Atkinson, one of the sisters of the Women’s Scottish Hospital contingent, who left England nearly a year ago for Serbia, to nurse the wounded soldiers of that gallant little nation. The party, who have just returned to London, included Miss Kate Burton, of Shadwell, Leeds.
Interviewed by the “Daily Telegraph” Miss Atkinson described the 200 miles journey from their Serbian headquarters to the embarkation port on the Montenegrin coast. They evacuated their hospital at Lazarevotz on October 19, and had to wait eighteen hours for a train to Krushevatz, where they stayed three weeks at the hospital, and found there Miss Vera Holme, the well-known suffragette, who used to drive Mrs Pankhurst’s motor-car.

“There was great shortage of food, and we had to pay 2s for an ordinary loaf – even then it was a trouble to get one. We had been there a few days when we heard that Dr Elsie Inglis was coming, and she went to the Russian hospital with her party. Five of Dr Alice Hutchinson’s party also came along. It was now made evident to us that we were not wanted. There was nothing for us to do, and the poor Serbian women wanted to help in the hospitals, because by so doing they would get something to eat. There was not enough food to go round, and every mouth less to feed made matters better for those who remained. So we left. Having secured eight bullock waggons we placed our luggage in them. This was very little, as everything beyond what we could personally carry when the time arrived that we should have to do so had to be left behind. Riding in the waggons and walking, we reached the end of our day’s journey, and then we had our first experience of sleeping in the open. We had to lie down by the roadside in the mud and slush, with no covering of any kind. And how it rained! It poured all night, and we, of course got wet through. The next day was a repetition of the first. There was no chance of getting a change of clothes, which had to dry on us. The second night we slept out, and again it rained, with the result of a soaking for all of us.”
AN ESCORT OVER THE MOUNTAINS

“I should mention that we started on this dreadful trek on November 5, and were walking, riding, and driving until last Saturday week. The discomfort of walking in our wet clothes may be imagined. We could not even change our boots, and when we got to the cold regions our clothes froze on us. If one took out one’s handkerchief to blow one’s nose it froze.
On one occasion I thought I had got a nail in my boot, but I discovered that one of my toes, my stocking, and my boot had all got frozen together. An old Austrian prisoner, who was a good fellow and very kind, took the boot off for me, and I managed to get along all right afterwards, but the toe is still bad. We came along with the Serbian army, and our party had an escort over the mountains. This was necessary, as we were told that there were 1,000 men wounded and 600 killed on the Albanian mountains. One day’s experiences were much the same as another, although the exciting incidents were sometimes more pronounced. There was never an excess of food. Sometimes we had half a loaf of brown bread served out, and sometimes we were able to buy a sheep, but this soon got frozen when we were on the mountains and was uneatable.”

TREK IN A GREAT BLIZZARD

“I saw twenty-eight dead horses lying by the roadside on one day. In a number of cases these were cut up by the peasants for food, and sometimes we were so hungry that we could have eaten them ourselves. When horses became too weak to walk, owing to being unable to get any fodder, their riders turned them adrift, but did not kill them, and the poor things walked until they dropped from exhaustion, and then died. There was always plenty of snow. The day we started to trek over the mountains there was a great blizzard. At Ipek we were able to get some pack ponies, and with these we continued the wearisome journey. We went over Velaco, a big mountain 7,000ft to 8,000 ft high, and there we encountered a blizzard. Two or three of our members went on in front, and we could not see them. I was determined to follow them, and did so.
A little later I was able to see the winding tracks up the mountainside, and eventually caught up with the other nurses. We were fortunate enough to get into a horse stable, where there was some straw and a fireplace in the corner. The old Austrian prisoner I have mentioned had followed us up, and soon lighted a fire, which he kept blowing to keep it alight and us warm throughout the night.”

HORSES FELL OVER THE PRECIPICES

“Sometimes the ponies got no food for two days, and if they had not been hardy little animals they could not have stood it. At times on the narrow ledges round the precipices the horses would fall over. I saw this happen to both horses and men. We saw no children on the road – a great many went over the mountains, and it is said that they were murdered.
It took us six or seven days to traverse the mountains. There was no track in many places owing to the snow, and sometimes this was so deep that we were up to the waist in it. The blizzard blew the snow into particularly deep patches on the precipice paths, and made them very difficult and dangerous to negotiate. We would see a very tired pony walking along one of these narrow paths, when suddenly the inside one of the packages strapped, across its back would catch a projecting piece of rock, and throw the animal off its balance. The poor creature, being too weak to recover, would fall over into the abyss below. 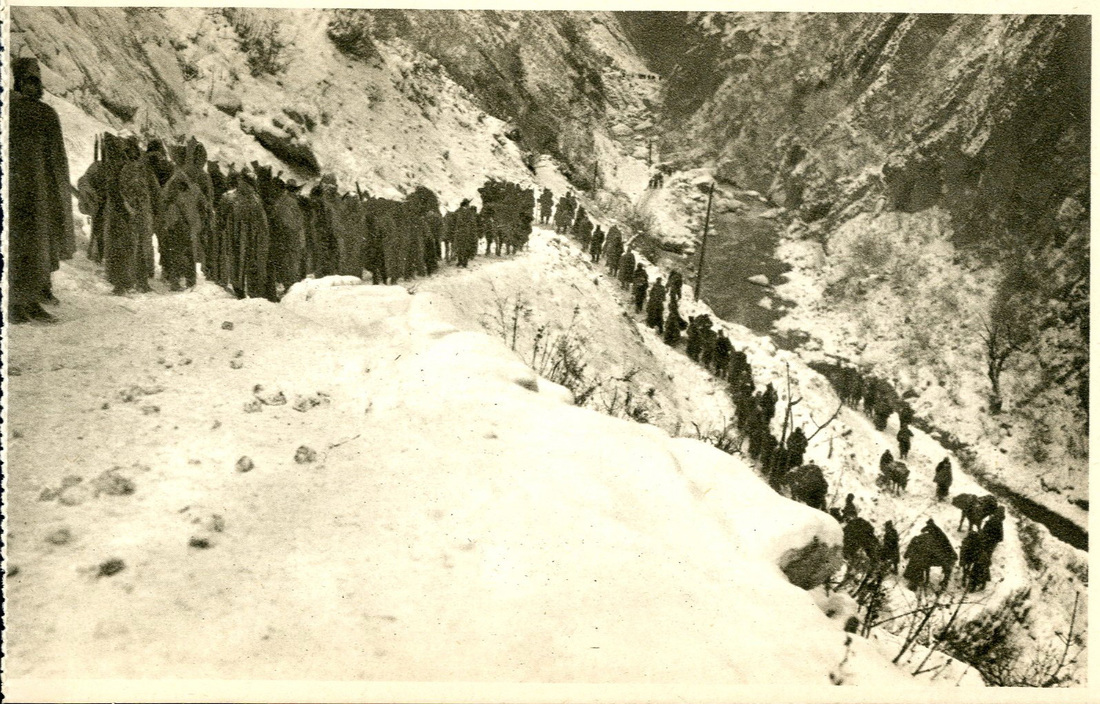 At Levekreka we finished trekking with our ponies and some of the sisters went on in motors. I stayed behind with Mr Smith for four days, and during that time we had no food except tea and bovril. We next proceeded to Podgoritza, where we had our first good meal – just how good it was I cannot attempt to describe, but it was very, very nice. The journey to Scutari was continued in horsed vehicles, and then we walked to San Giovanni, a seaport, where we were expected to find an American ship. We were disappointed, however, for the place had been bombarded a few days previously, and six ships had been sunk. This was the end of our journey, which was, I suppose, about 200 miles. Subsequently we left, after a five days stay in an Italian ship, which came in with food. We got away at midnight. The boat was packed with every sort of refugee and it was an awful night – one I for one shall certainly never forget.”

The ship took Lizzie to Brindisi in southern Italy where she made her way overland to Turin, then onto Dieppe in northern France, arriving in London at Waterloo Station.

After her epic journey, she later went on to serve as a nurse with the British Committee of the French Red Cross. Sadly their records have not survived, and the 1921 census will not be released until 1st January 2022. As well as the British War and Victory medals, Lizzie was awarded the Serbian Cross of Mercy.

Her mother, Hannah, died aged 72 in February 1921 and is buried in Winterton Cemetery. Determined to see if Lizzie survived the war, Estelle investigated further and established that Lizzie was present at her half brother’s funeral, Frank HOLMES, in April 1918 at Winterton Cemetery. In the funeral report published in one of the local newspapers, amongst the family mourners Lizzie was listed as ‘Mrs Lewin’. It seems as though Frank was sympathetic to the cause of women’s rights as one of the floral tributes read “With deepest sympathy and in remembrance of a fellow worker from members of the Women’s Unionist Association”.

A search of the marriage indexes, showed that Lizzie had married Harry LEWIN in Westminster in 1917, and in 1920 a son was born - Richard George LEWIN. The 1939 register shows Lizzie living at 18 Arthur Road, Margate, Kent and her sister Leonora was living next door as a companion help. Lizzie continued to live in the area and died in October 1968. She is buried in an unmarked grave in Margate Cemetery. Her son Richard emigrated to Australia but has since passed away. Estelle is now in contact with the family who said that they knew Lizzie had indeed been a nurse during WW1 but had no idea of her epic journey through Serbia.

Lizzie's account of the Serbian Retreat was reported in many newspapers, both in the UK and Australia. The South of England Advertiser reported a more graphic account of her journey. 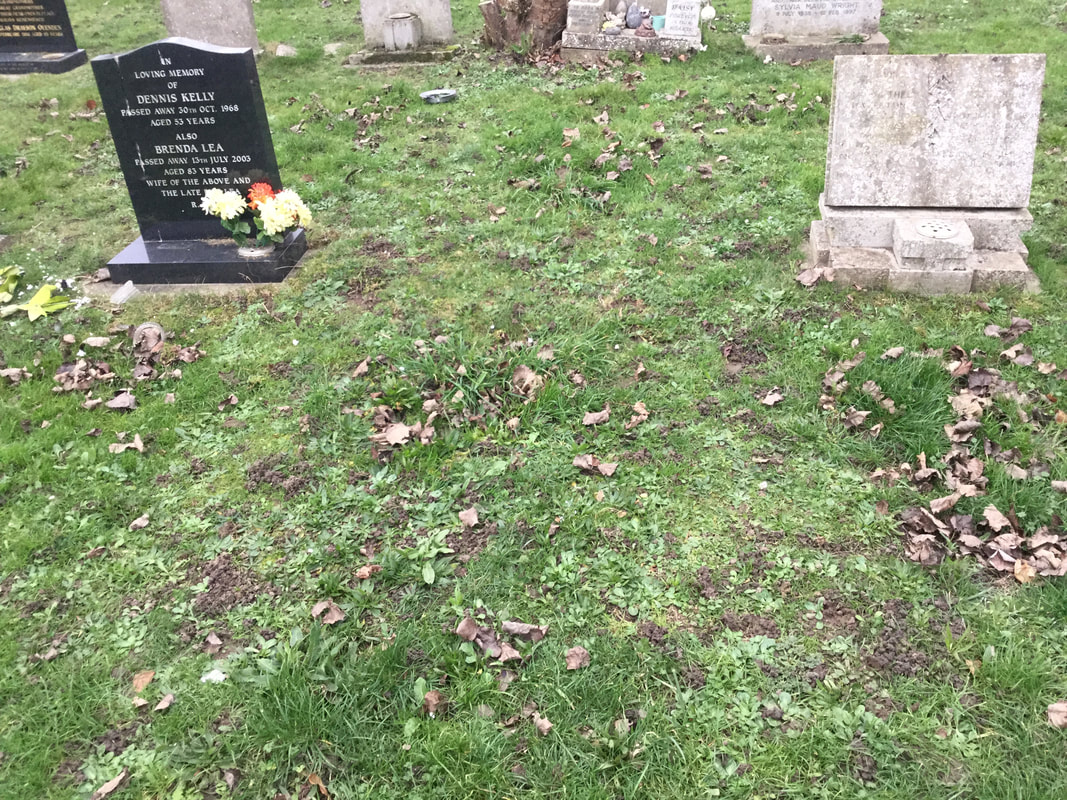 If there was ever a good reason to thank those who returned from conflicts since WW1, then this is an excellent example.

Back to WW1 Survivors (A-C)