The Corps was formed around 1925 from experience gained from WW1 when a new form of warfare became very apparent that of War in the Air, the task was given to a Major General Ashmore, a fighter pilot from the Royal Flying Corps.

Initially the Corps operated in Kent and Sussex and consisted of some 40 plus Observation posts sited about 10 to 15 miles apart linked in clusters of 3 and reporting to centres at Horsham and Maidstone. The Royal Air Force would fly over the manned area to allow the Observers to practice the tracking procedures. These flights would be at a weekend. Communication was by the local GPO land line system, where a jack plug would be installed at a convenient pole close to the post site. Recruiting was undertaken by the Special Constabulary personnel becoming Observer Specials.

As the European situation deteriorated through the early 1930s, posts were established first along the east coast and eventually covering all the UK and Northern Ireland. At the Winterton Post (Charlie 2) was established in July 1936 coupled with with Scawby (C1) and Scotter (C3). The first Chief Observer was William Brown (then Chairman to the Council). On 24th August 1939, the Air Ministry, who were now in charge of the Corps and under very strict security, called the Corps out to man up the Posts 24/7. This was a month before war was declared.

This 24 hour manning continued throughout the war until May 1945. The Corps, now proudly called the Royal Observer Corps, the title having been awarded by King George VI in 1942 for the service the Corps gave during The Battle of Britain. Also in 1942, the Corps was issued with RAF style uniforms with ROC insignia and for the first time, women joined serving mostly in the Operations Centres.

The Winterton Post had a very commanding view of the Humber which the German aircraft would use to keep under the radar and enable them to enter the UK to bomb the industrial towns in the west. A daylight raid was tracked early one morning in 1941 when a Heinkel 111 flew over the Blackburn Aircraft factory at Brough. Making their report, the Operations Room said would they check the type as the RAF said there was no hostile aircraft within 200 miles. The reply from the Post being "Well tell them it's just bombed the factory".

During The Hull Blitz, C2 had a line of sight view and were asked to give a commentary on what could be seen along with the reports of hostile aircraft. On Christmas Eve 1944, a Doodle Bug raid crossed the area for an attack on Manchester. Launched 40 miles out from 45 Heinkel 111 aircraft, only about three reached the target. One did crash onto Read's Island but did not detonate, and another at Epworth.

The Corps were stood down for a short time in 1946, but the Air Ministry called them to continue weekly training meetings on a standby for any future hostilities.

1955 saw a new threat to Europe from the Cold War. With the development of radar the ROC aircraft task became less, except for low flyers under the radar. The new threat that of detecting and reporting the radioactive fall-out from the use of nuclear weapons in order to provide the United Kingdom Warning and Monitoring Organisation with information on which warnings to service and civil authorities could be based. The Corps undertook this task and a building programme was put in place to provide underground nuclear bunkers on most of the aircraft reporting sites. The Winterton bunker became operational in 1957 and continued to train and exercise until the Corps was stood down at the end of the Cold War in 1992. 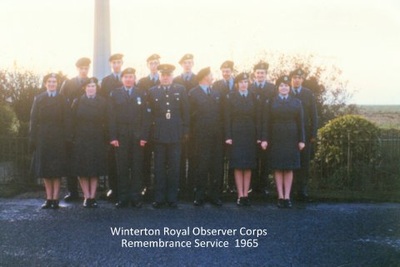 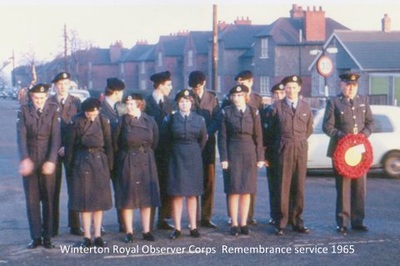 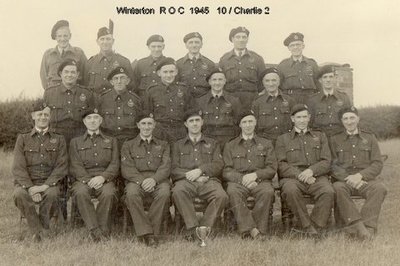