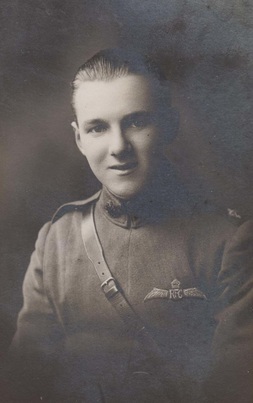 During Estelle Mumby's research into those with links to Winterton who served during WW1, a little known story came to light. Winterton residents at the time would have certainly known of this event and may have even witnessed the terrible tragedy.

Albert Charles MASTERS from Raunds, Northamptonshire, was born in June 1898. He enlisted into the Royal Flying Corps in June 1916, and in March of the following year, he gained an aviators certificate by flying a Caudron Biplane at Beatty School, Hendon. Albert eventually became a 2nd Lieutenant and at the beginning of April 1918 the Royal Flying Corps merged with the Royal Naval Air Service to form the Royal Air Force.

​According to his service record, Albert was posted on 23rd April 1918 to 61 Training Squadron based at South Carlton, near Lincoln.
​
On the morning of 1st May 1918, Albert took off in Avro D173 from South Carlton airfield. He flew with eight other aircraft from 61TS. At around 10am just outside Winterton (possibly in the Carr Lane area), two of the aircraft collided. According to a local newspaper report, “One crashed through some trees, wrecking the machine and the pilot was killed. The other machine’s propellors were broken and the airman escaped unhurt.”

The pilot killed was Albert MASTERS. A search of the RAF Museum’s records show that the Court of Inquiry (the military version of an inquest) recorded the summary as “The cause of the accident was in our opinion due, whilst 2nd Lt A. C. Masters was on duty on Formation patrol in Avro D.173, to his turning in front of 2nd Lieutenant Hambrook, and having his aileron cut away by 2nd Lieut. Hambrook’s propellor, thus causing him to lose control and crash to ground.”

Another newspaper report says that Albert was “looping the loop, when a strap of his machine broke and he fell a distance of 4,000 feet and was killed instantaneously”.

The other pilot involved in the crash was 2nd Lieut Richard Duncan HAMBROOK who was flying Avro B4346.

Albert was taken to No 4. Northern General Hospital in Lincoln (now Lincoln Christ’s Hospital School). The cause of death was recorded as ‘Accidentally killed whilst flying on military duty causing the body to be buried’. Albert was aged 19 and was buried in Raunds Wesleyan Methodist Chapelyard. Whilst this young man’s name cannot be added to the Winterton War Memorial as he has no connection with the town, it is important that Winterton remembers his sacrifice.

In December 1916 a landing ground with two grass landing strips opposite Eastfield Farm on Ermine Street was established for the use of No. 33 (Home Defence) Squadron. Was Albert trying to land his aircraft there?